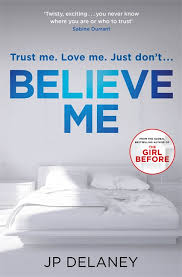 I have finished J P Delaney’s latest just now – BELIEVE ME . I went into the book with some expectation based on his debut novel THE GIRL BEFORE . But , truth to be said , this has become yet another hastily-cooked-up-second-release-after-a promising-debut .

Claire Wright likes to play other people. For Claire every day events play out like a movie scene in which she is an actor . She is also constantly on the lookout for gestures and nuances – both in others and herself which would be “ gold dust “ for her future roles . Picking up nuances is something that Claire does as everybody breathes , yet consciously she commits these nuances to memory to use them later in the appropriate circumstances – reel or real . An undocumented British drama student , she is employed by a firm of divorce lawyers to get incriminating evidence on straying husbands whose wives are the clients of the firm . Claire ’ s narrative is juxtaposed with movie scene script snippets which is an interesting twist to the regular narratives. She throws up words like jump cuts, montage scenes, acting styles…. – in short , a hardcore passionate student of theater who got her big break not in theater but in assisting the NYPD in unmasking a  killer .

When Stella Fogler is  found murdered in her hotel suite ,  Claire comes under police radar as she was one of the two people who last saw Stella alive .  As we all know , when a married woman is found murdered , its always the husband who becomes  the de facto suspect in the investigation and Patrick Fogler is no different . Patrick is incidentally the only husband who had rebuffed her advances when Claire  has put up her easy pick-up act . When a forensic profiler comes up with what she believes substantial evidence against Patrick Folgate ,  in not one ,  but several gruesome murders , Claire is asked by the police to entice Patrick into revealing his darker side ( is there one first ?? ) .

As Claire begins to forge an intimate relationship with Patrick  and the more she gets to know him , she begins to doubt the police theory and eventually the police force itself . How could such a faithful husband (despite his wife ‘ s doubts ) be a cold – blooded killer? Is there more to this whole ” operation ” as the forensic profiler terms it than what she has been told??

Does she know the actual picture ?

There are a few elements to the plot which however made the phrases ” No…not again ” , “ seen this before ”  circle my brain while I was reading this book too often . Frankly , this mix always goes for a very predictable ending – the unreliable narrator , the limited number of suspects , the very obvious motive(s) in some cases . It’s no surprise considering that there had been very few jigsaw puzzle pieces and the narrator had to play it up several ways deliberately before putting together the pieces  of the puzzle in the right place .

It would be really good if our modern day suspense writers try to get the tone of the characters right to set a strong foundation for a psychological premise of the story  instead of relying solely on  the narrator . While Claire seemed to be characterized pretty well , the author hasn’t got the tone right for Patrick .

The book packs good number of twists to keep the reader continuing but the ending became very predictable and few elements were downright stupid . A random character pops up with obsessive tendencies ( however similar it may be to the  profile of the killer ) and attempts a murder . The plot just gets too obvious that I need to get to the final pages for a dramatic ending with the killer and this is just a decoy . If you actually want the reader to fall for your red herring atleast make it sound convincing . Sans motive , sans good number of pages / appearances the red herring becomes laughable .  And red herrings are meant to make the suspense game intense – not defuse the tension .

In all , I am in the mood for a good old fashioned detective story or a regular psychological thriller where the police are in the ground looking for clues and being just in time to foil the killer ‘ s plans for another murder or to simply haul him up reinforcing our faith that justice prevails ( atleast in fiction ) .  The unreliable narrators in the books I have read this year have made me wary of them for some time in the future definitely – the mere idea of yet another makes me run away from whodunits .

Guys , you can definitely pick up The Girl Before  by the same author . You can read the review here