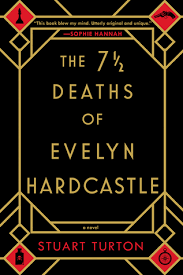 Books Are My Bag Readers’ Awards for Best Novel (2018)

The house party is meant to be a celebration but it ends in tragedy . As fireworks explode overhead , Evelyn Hardcastle , the young and beautiful daughter of the house , pulls the trigger of the pistol positioned at her stomach .  Aiden , one of the guests at Blackheath is tasked to find the murderer of Evelyn Hardcastle because somebody believes that there is more to the death of Evelyn Hardcastle than the suicide that the guests witnessed . . .

But Evelyn will not die just once . Until Aiden can solve her murder, the day will repeat itself , over and over again . Every time ending with the fateful pistol shot .

The only way to break this cycle is to identify the murderer . But , on cycling to the beginning of the day , Aiden wakes up in the body of one of the house guests – and every time it ‘ s a  different guest .

Aiden has a deadline , deadly enemies and too many dark secrets to uncover to unmask Evelyn ‘ s killer to escape Blackheath . . .

My thoughts on the book :

We have time and again seen our suspense fiction writers (   more often the debut authors ) experiment with the narrative  techniques – from the ( now done – to – death ) unreliable narrators to the reverse narrative and everything in between . . . In this scene , TSDOEH is still a bold attempt and Turton has pulled it off  marvellously . It is not far – fetched to compare the crime fiction author to a jigsaw puzzle designer who needs to cut every piece  to precision so that it fits with the next piece in sequence perfectly . While authors have sometimes had slip – ups with some of the frequently incorporated techniques only , to pull off a very convincing thriller with a previously unattempted time – loop element is nothing short of a feat . . .

The first thing that I loved about this book was that it has the power to keep the reader hooked . Let me explain –  I had always been a little wary of audiobooks . I am a multitasker and getting me to sit down with one task at a time is not that easy ( the exception being ONLY  books . . . ) . With the ” convenience ” of ” reading – on -the – move ” , I was not sure if I would be invested in the story as I would be in a physical book . I had tried it out earlier with some of P G Wodehouse ‘ s novels and it didn ‘ t work out . I am not sure if it was the story or the narration that lost my interest . . . I turned to Audible only under dire circumstances when  I ” had nothing to read ” in my shelves . . .  It might sound cliched but the story and the narration had me hooked right from the first chapter . .

A special mention should go to the narrator of the audiobook  Jot Davies . Without the glowing reviews of his performance , I doubt if people can be easily persuaded to pick up the book from the collection there . It lived up to all the expections set by these reviews .

While several authors fail to make every character memorable when there a bunch of them making their entrances and exits at different times ( or sometimes attach their profession like the doctor or the solicitor as a primary identifier with some by – the – template characteristics thrown in for some extra depth ) , Turton does not seem to have stumbled on this aspect which sometimes seems to have tripped up even the best of the crime fiction writers . . .  I guess this needs some elaboration :

The reader and Aiden is more or less on the same boat – Aiden wakes up every time in the body of a different guest and that ‘ s when the reader also gets a proper introduction to the character who would have been yet – another – guest ‘ s – name until now . A good two or three chapters is all the space that a character gets  ( with all the drama in the house too !! ) to make an impression on the reader .  Whether Aiden is slow to pick up any hints from his earlier avatars or not ,  an observant reader will surely able to connect the dots between the last loop and the current loop . But I should warn you not to underestimate Turton  –  that ‘ s as far as you can get . Just when you think you have an idea , Turton brings up HIS ideas and they would leave you dumb – founded . You would have never had the slightest inkling of the trajectory the plot would trace . . .

The author ‘ s Goodreads bio states that ” Stuart is not to be trusted. In the nicest possible way ” . It would have been better if they put it out as the warning for the readers also . . .  Just when the reader thinks that the mystery of Evelyn ‘ s death has been solved and he / she can get back to the real world , Stuart decides to pull yet another rabbit from his hat .  The final reveal was simply brilliant . . .

If you have already read the book , you can say in the comments section about your thoughts on the book  . . . Until the next review then . . .

P . S : Maybe , now I will finally pick up a classic from my shelf as I mentioned in my previous post . . .