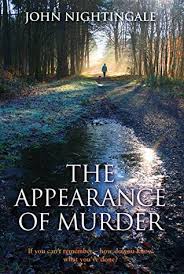 David Knight has decided to stay at home and finish his long overdue latest book featuring his regular sleuth Tom Travis while his wife and two sons went on a week long vacation to the country . On the first day of this much – awaited week , with his wife and sons absent , David is sitting at his desk with a glass of wine , determined to keep his word to his family and definitely his agent . The doorbell rings and David opens the door to this caller , with no idea of what he is inviting in . . .

The young woman , Perdita shows a photograph and claims that one of the five men in the photograph is her father . And David is in the photograph . With rumors that one of them might have also murdered their musician friend from some twenty – five years back , the week is off to a great start . Since neither option is going to make explanations to his wife easier , he can only hope to get the questions about the young woman ‘ s parentage and  the identity of the murderer in a possible sleeping murder  answered , before his wife returns from her vacation . The trouble is that David has a gaping black hole in his memory concerning that time period . . . The more he comes to know about that time period , the more incriminating the facts seem to be for him . . .

My thoughts about the book :

John Nightingale ‘ s addition of David Knight & Jerry Davis to detective fiction is a timely one I think . We couldn’t dream of another detective – sidekick duo who could take it up from Sherlock Holmes & Watson – that ‘s why Gatiss and Moffat had to transport Holmes to the 21st century and get him solve crimes which were again spin-offs from the crimes he had already solved . Of course , now he is more tech-savvy as the times and the crimes demand .  The Sherlockian fandom is too particular  that getting the Sherlockian vibes right is too great a burden for several of the crime fiction writers out  there I guess  . When you can get an idea about some of the struggles of a crime fiction writer  in David ‘ s portrayal , the last thing any writer would need is a character who has too much of a life of it ‘ s own . And Sherlock , needless to say is guilty of that ‘ presence ‘ .  I think that is why Sophie Hannah was ready to try her hands at a Poirot mystery  but Gatiss & Moffat were happy to keep several elements of the cases intact even in the spin-offs . I guess that should be a discussion for another post . . .

It is a smart move to make David Knight a crime fiction writer and not yet another consulting detective . Because any detective who is to come will always be in the long shadow of The Great Sherlock Holmes . When his creator could not write him off , how can one expect him to be shadowed by the newest arrival in the scene ? David is a decent writer who can put together a good mystery for his regular Tom Travis . But when there are elements of a mystery in his own life , he does not slip into the role of a detective with ease as one might imagine it of him , considering that he has built his career by throwing Tom Travis into several such situations and working out his splendid denouement in the last pages that has gained Travis a loyal following . Instead , when he tries to jump into the shoes of his own creation and think like him , he is slowly getting to understand that detection was never easy as Tom Travis seemed to make it . . .

Thankfully , for once the side-kick thinks –  maybe that’s because I have not ventured beyond Poirot & Holmes when it comes to detective duos . . .  Jerry is the man of action here .  You can dress him up in Holmes ‘ deerstalker hat and give him his pipe and the words  ” Come David , the game is afoot !! ”  would not sound out of character with him .  Those words would not go well with David who looks somewhat dazed every time  there is another plot twist  –  he has more of Dr Watson than Holmes in him .  Of course , David is the protagonist here – so we will  have David eventually rising up to his potential that gained Tom Travis his loyal following .

And all is well that ends well –  David has identified Perdita ‘ s father among his friends and the question of the murder is also finally settled . The pieces of the puzzle find their right places and the ending is immensely satisfying . David might not be a detective in every sense of the word who  can offer solid proofs for his deductions like Tom Travis  or Holmes does , still David ‘ s epiphany if not his detective skills can be relied upon  –  otherwise he would not have qualified to become the protagonist in the first place .  A man should have something that can be relied upon – even if it is only gut instinct or epiphany . . .

The tone is light-hearted  and there is  lot of wry humor and  interesting plot twists to keep  the reader guessing till the very last chapter .  As no lives hang in the balance and there is no race against time ,  readers can  read this book without  reactions like nail-biting , reading the last few pages because you would die without knowing who X is , breathlessness or stopping dead in the tracks due to some spine chilling plot twists . It is interesting to see that even genre fiction specimens like this one can offer interesting  variations with the plotting styles . . .

This is the first in a series of books featuring David Knight , the crime writer . For me , outings with David Knight & hopefully Jerry Davis will be an interesting deviation from all the tension packed crime fiction out there .  I would recommend it for holiday reading  for suspense fans when they need a respite from all the nail-biting and the tension of the regular fare and need to pick up something lighter . . .

P . S : This is just my little idea – David Knight may  have too many autobiographical elements of John Nightingale . The fact that the author chose to name his  protagonist Knight ( short form of Nightingale ) itself makes this suspicion stronger . When he describes the struggles of a crime fiction writer ,  we can say easily where it comes from . So , it might not be  a far fetched idea to say that Knight is a fictionalized portrait of the author himself  .  I was not sure if I should add my assumptions which might or might not be true . . .  But as an afterthought I decided to put it in the post . . .

If you have already read the book , you can say in the comments section if you agree with my idea . . . Until the next review then . . .