September 15th being Agatha Christie’s 128th birth anniversary , I  revisited the Christie’s’ in my bookshelf over the previous week . It might sound a bit odd to revisit mystery fiction when you would already know the culprit but trust me , rereading Christie did not prove to be dull . She managed to throw the spotlight on some of the storytelling elements which had gone unobserved during the fast & furious one sitting read .

Sans the pitfall of too-descriptive / metaphorical  language or other innovative narrative elements/styles of today’s thrillers or the “psychological” elements of the psychological thrillers Christie’s straight narrative still had us hooked to the book even more than books with the above mentioned fuss n feathers . When we hear the name of Christie , some of the most popular titles like And Then There Were None , The Murder of Roger Ackroyd need no introduction for readers .  So , here today, I have a list of some of the most underrated Christie titles which most of us tend to miss out with all the noise the popular titles are making. 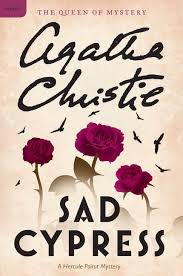 Elinor Carlisle and Roddy Welman , an engaged couple ,  arrive at Hunterbury Lodge , Mrs. Welman’s estate on receiving an anonymous letter accusing someone of taking advantage of their aunt . Both are looking forward to a substantial inheritance on Mrs. Welman’s demise who is now an invalid following a stroke . Unfortunately , Rodney falls in love with Mary Gerard , the lodge-keeper’s daughter  whom Elinor suspects to be the person whom the anonymous writer meant . Elinor breaks her engagement to Rodney .

When the story begins Elinor is being tried for the murder of Mary Gerard – did rivalry in love prove to be a compelling motive for Elinor as everybody believe ? As Poirot tries to save Elinor from the gallows he uncovers several startling truths ….. Is Elinor truly innocent or a cold blooded murderess?

The solution to the puzzle simply left me speechless . I would strongly urge you to pick up this one . You can get the book here – Sad Cypress 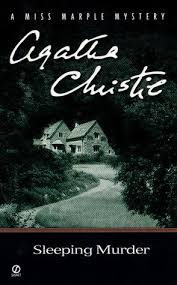 Miss Marple’s last case involves solving a ‘sleeping murder’ – a murder that has evaded detection for 18 years . Gwenda and Giles Reed  move into Hillside which turns out to be Gwenda’s childhood home . An evening at the theater triggers a childhood memory of being a witness to a murder – but where? .Who was the victim ? Who was the murderer ? Gwenda draws a blank for these questions except for a single name that she gives for the victim . As  they start piecing together the past they seem to get too close to discovering the murderer’s identity . For somebody who has committed the ‘perfect’ murder , the past should not be dug up and he/she will resort to anything to keep it so – including killing again .

Like  several amateur detectives , the Reeds are gung-ho about snooping around and do not realize the dangers they put themselves into . So, enter Miss Marple , ‘ the perfect Victorian piece ‘  to ‘ look after them ‘ ( to quote her ) . As a crime – Miss Marple realizes the dangers of delving too deep into the past – a murder , more so . But , an unsolved and ( unsuspected ) murder from the past proves to be too intriguing even for Miss Marple ( and not to mention , definitely dangerous )…. 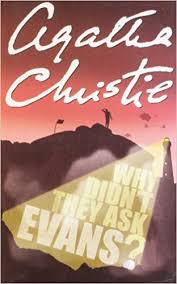 The last words of a dying man ” WHY DIDN’T THEY ASK EVANS ” spur Bobby Jones and his friend Frankie into  snooping around  trying to find the identity of the dead man and also , what did he mean by those words ….

Again we have two amateur detectives  here but what made the duo lovable was the fact they did had a good amount of luck in stumbling upon clues and they were like two kids playing the guess-who game – bringing in some good humor , at times  bungling up just like an amateur would ,  putting together pieces when there is a sudden brainwave –  I especially loved Frankie . Let me put it down here that amateur detectives don’t mean no logical explanation to their deductions .  What I love specially about them is that you get a good dose of drama and a change from our very business like Poirot or astute Miss Marple – but still Christie makes sure there is one of the pair who is bright enough to provide the readers with the logical explanations to their findings . The fun-loving sleuths meet their match in a villain who is all at once – suave , diabolical  and blessed with ( equally ) good humor who comes up clean in a most characteristic way … After reading the villain’s confession , I was equally amused with the villain too – we don’t comes across such interesting and if I may say , charming villains often….

#4 Death Comes As The End 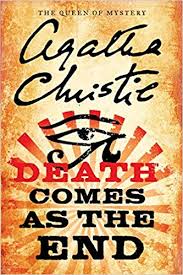 Set in 2000 BC Thebes, the story follows a spate of murders in the house of Imhotep, the Ka mortuary priest. It all began with the death of Nofret, his young concubine from Memphis. Her arrival at Imhotep’s house had not been without some animosity . She antagonized Imhotep’s sons and their wives – only the threat of disinheritance seemed to keep Yahmose and Sobek’s wives from bullying her any further. Her death seemed to bring everything back to as it was before Nofret’s arrival –  BUT IT WAS NOT SO .

Soon , as Renisenb , Imhotep’s daughter witnesses , the family members become victims to the unknown murderer one by one – Or is it the vengeful spirit of Nofret exacting her revenge on the family?

Christie puts together a really convincing ,  racy thriller in a timeline that we don’t have much idea about .  I think this book alone can establish  Christie’s unsurpassed mastery in crime fiction writing – I can’t recommend this enough .

Let me know in the comments section which books you loved from the above list if you have already read them or which books are you planning to pick up ?